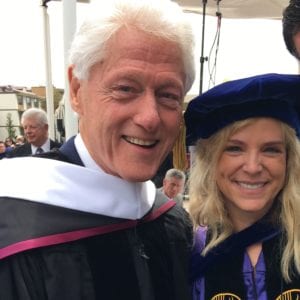 “Fortune Smiles on the Brave”

10 years ago I met President Bill Clinton at a fancy fundraiser when my friend, Joye, and I found ourselves in the VIP photo line somewhat by accident. Fast forward to now. When I found out Bill Clinton was coming to Loyola Marymount University (LMU) to be our commencement speaker I decided to set a SMART goal of getting an updated picture with him. Commencement day is a huge day for our grads and I was feeling particularly celebratory this year as it was also the one year anniversary of me being officially told I was cancer free and I had just completed my first full semester back to teaching at LMU. Once I found out Bill was coming, I set a SMART goal. SMART is an acronym that stands for Smart-measurable-actionable-results oriented- time-bound. So, I set the SPECIFIC goal of getting an updated photo with him at graduation. MY goal was MEASURABLE as you can see visual evidence as it either happens or not, it was ACTIONABLE as I had to take specific actions to make this happen. So here is the story about the actions I took. I was up on the stage and he was about 10 feet from me and I asked a Secret Service guy/member of his entourage for permission to ask President Clinton for a photo when he finished his speech. They told me very politely told me no. However, when Clinton came off the stage, a colleague whispered in my ear, “Ellen, fortune smiles on the brave.” So I put out my hand and asked him for a photo and he said yes! The secret service guy smiled and held out his hand for my camera and took the photo for me. My goal was also REALISTIC in the sense that as a faculty member I knew I would be positioned somewhat close to him but it was still difficult to achieve as there was 18,000 people at this event and he was incredibly well guarded, and finally my goal was TIMEBOUND as it had to happen at graduation.

I believe I met this goal by using several techniques that can be applied to any situation, even ones that are quite serious. One, I think that simply the act of setting a SMART goal is powerful. Second, I told everyone I knew that it was going to happen and I had a lot of fun joking about it with colleagues so I think there was a lot of energetic support for me. Third, I could actually see this picture of me and Bill in my mind’s eye and I visualized posting the picture on Facebook. The whole thing was so silly and fun that it just made me smile so while I was intent on it happening, I did not get overly attached or stressed about it. So, in a weird way I have found that sometimes I meet goals by setting them and then letting them go. I know that sounds a little goofy but maybe you know what I mean. In any case, when I look at this picture, I feel joy as it was my own little celebration of beating cancer and being back in the swing of things at work. To paraphrase our commencement speaker: May you set some SMART goals today and set the world on fire!

Visit this link to learn more about goal setting and other career tips.