SHARE Your Talents: Why does community based learning matter anyway? 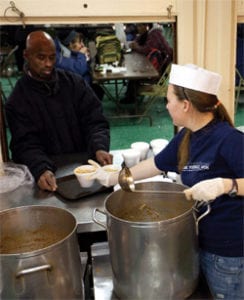 It’s Fall. For those of us on a Los Angeles university campus, this means midterm exams, switching over from sandals to boots, conference paper deadlines, end-of-the year goals to accomplish, and getting ready for the onslaught of the annual holiday sacred trinity (Halloween, Thanksgiving, Christmas). In other words, it’s a busy time of year and we are profoundly busy people. On top of all this, my 62 students in my two Managing People and Organizations courses are once again doing 15 hours of community based learning for the semester. More work for them and for me. Does 15 hours a semester of service learning per student really matter? Sure, it matters in terms of understanding concepts in the curriculum better (so we talk about organizational culture in class and our community based organizations give us a laboratory to understand these ideas). But, does it really matter in the bigger scheme of things? Do our small efforts to feed the hungry, shelter the home-less, make art with kids or sit with an elderly person really make a difference? Or is just another thing to do? Sometimes I know my students wonder and I ask myself this question as well.

In fact, it matters a lot. I was reminded of this on Sunday when I read a great article in the Los Angeles Times about the work of non-profit organization, SHARE, that has created an innovative program to give homeless people a place to live in community in a real home. In the past, my students have worked with SHARE on multiple occasions. I remember when the director, Jason Robison, came to my class and talked about this program. I remember thinking it was a great idea but a lot of work! Every time students have worked with SHARE they have experienced how great the need is in the communities that SHARE services and often students have felt overwhelmed. And yet, by the end of the semester, most students have experienced a sense of invigoration because they were able to see that they contributed their talents and some of their great ideas to SHARE. This program reminds me that if enough people believe and are willing to share their talents, great ideas can come to fruition. While 15 hours a week is not going to build a program, our collective efforts of nearly 1,000 hours a semester helps move these kind of programs forward. And to the person on the street looking for shelter and kindness, it matters a lot.

Here’s the article, copied from the LA Times:

By creating a family atmosphere, the Self-Help and Recovery Exchange’s collaborative housing program aims to help the most difficult-to-place of L.A. County’s homeless.

Inside the white bungalow in Montebello, noise rules.

The television blares; a robotic voice bellows from a red radio, updating National Weather Service information. A man with a Santa Claus beard — and the build to go with it — sits in a chair squeezing sallow lemons into a cup and talking about what he says are revelations from God.

Two other men, self-proclaimed best friends, slouch on the sofa. Stephan Polfliet talks constantly and Mitchell Kautz stares off, presumably listening. Another, Grady, scarcely leaves his bedroom except to grab a smoke in the frontyard, where vegetables grow and fruit trees bloom, including papaya.

Elisa Santana Cenzano owns the house and says she has no problem watching over such a mismatched group. But, she confides, she is vigilant about picking the papayas or else Robert Gifford, the man with the Santa beard, will snatch them first.

This scene of controlled chaos is part of one L.A. nonprofit’s never-give-up experiment to reduce homelessness among the most difficult-to-place people.

It was seven years ago that SHARE, or the Self-Help and Recovery Exchange, launched its collaborative housing program; and it now has a network of more than 1,200 beds in about 200 private homes across Los Angeles County.

Kautz says the program is teaching him to “count on nobody but myself.” Indeed, self-help is the program’s mission. Among its clients are recovering addicts; others have been diagnosed with various mental health disorders; still others fall into both categories.

“One of our mantras is that for any given problem, there are an infinite amount of solutions,” says Jason Robison, director of SHARE’s housing program.

The nonprofit has been around since 1996, but a report by the Los Angeles Homeless Services Authority changed things. The 2005 report said that on any given night there are 90,000 homeless people in the county — and one-third of those have severe mental illness.

“People will come in from Broadway or skid row, and we help house them,” says Robison.

There is no lease, but tenants — referred by the county Department of Mental Health, independent counselors or advocates for the homeless — must have a monthly income of at least $500, usually through Social Security or disability insurance.

Living two to a room, tenants also must follow a set of rules, including doing chores and attending counseling sessions.

Kathleen Piche, communications director for the Los Angeles County Department of Mental Health, says her agency joined forces with SHARE on a trial basis through 2015 in Service Area 7, which includes Montebello. And it seems to be working, with dozens of people having been placed.

“The shared housing model offers another housing option for those individuals with limited income and/or a desire to live independently but not live alone,” she says.

Homeowners, or the housing managers they hire, also must complete a training course taught by the Sober Living Coalition. They learn to set house rules, handle someone going off his or her medication, maintain a healthy environment.

He knows how impossible this seems because addicts who are also diagnosed with a mental illness are becoming the norm, he says, not the exception.

Still, there are success stories. And if someone is not the right fit, room is found at another home. Robison says the average stay at any one house is nine months. “The thing that works is tangible social support — the love of family,” he says. “And that can be the family that you know or a new family you create.”

Of the Montebello group, Polfliet, 54, was the first to arrive. Diagnosed as bipolar, he says he found SHARE while cruising the Internet. His rent, like that of the others here, is $475. Having lived here since January, though, he’s thinking about moving, maybe have Kautz join him, maybe a place on the Westside, he says, closer to the ocean.

And it would be away from Gifford, Polfliet adds, nodding to the porch, where the 69-year-old has propped his ruddy legs on a chair. Gifford has venostasis, a condition that restricts blood flow, which is what landed him at the Veterans Affairs Healthcare Center last year. Officials there referred him to SHARE.

Having lived on the streets for 38 years, Gifford likes being in a real home. He talks about God a lot, though, and that is one reason he and Polfliet verbally spar so often.

Gifford is not unaware of how much he talks, recalling how he even tried to explain to the doctor who diagnosed him as schizophrenic that God had spoken to him. “I was gonna enlighten her as to how the universe works,” he says.

Leading to SHARE’s downtown L.A. office are 34 red steps, punctuated by words like hope, unity and peace painted in white. The board in the front room displays the self-help groups that use SHARE’s space: Narcotics Anonymous, Alcoholics Anonymous, about 40 in all, though SHARE has ties to 500 programs.

To Kautz, this office is home to some of the best moments in his new life; the struggles of other addicts give credence to his new path.

He, too, was diagnosed with schizophrenia. Although he used to live at his mother’s place in Huntington Park, the voices in his head became overwhelming. “The voices told me to kill myself or that I was no good,” Kautz says. Drinking helped drown out the voices. So did methamphetamine.

Kautz is at the downtown office to support Polfliet at his weekly bipolar group meeting. But on this day, the meeting is canceled, so Polfliet searches online for a new place to live.

A few days later, at a house in Ladera Heights, Polfliet has to choose.

“Do you like it?” he asks Kautz, who is standing nearby.

Weeks later, Gifford is back at the Veterans Affairs Healthcare Center, hobbled by swollen ankles; and Kautz alone remains of that original group. He sits on the porch and talks of how much he wants this to succeed.

“Hopefully in the next five years,” he says, “I’ll still be here.”
catholicmission.nd.edu